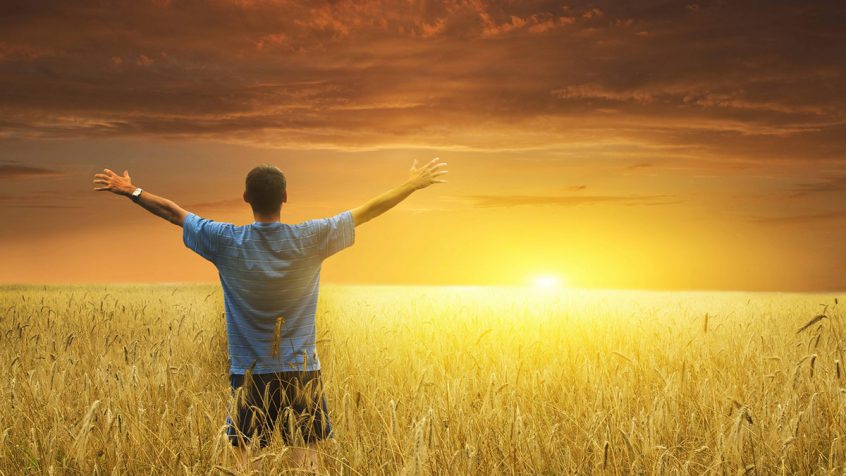 But the fearful, and unbelieving, and the abominable, and murderers the sexually immoral, and sorcerers, and idolaters, and all liars, shall have their part in the lake which burneth with fire and brimstone” (Revelation 21:8)

What is your destiny?

This is the most crucial question that needs special consideration and meticulous search in order to get the right and suitable answer for.
Inside every one of us dwells a certain fear and worries.

from the unknown These worries, either we’re aware of or not, are what we call “The Eternity”. Not to mention that eternity means the life after death, it’s a life not limited to days or months or years. Eternity is actually created in all of us and is crying out giving us the urge of searching for the unknown destiny either in this life or the life after.

We would sometimes try to hush that inside voice or ignore it but only to find it besiege us. It’s simply the voice of the conscience planted by God inside the human being so as to discern between good and bad, right and wrong and consequently no excuse would be held for the human being before God the judge in the day of judgment.

And now let’s read the following verse from the scriptures that explains what we’ve just mentioned previously:

“He has made everything beautiful in his time also he has set the eternity in their heart, so that no man can find out the work that God has done from the beginning to the end” (Revelation 21:8) (Ecclesiastes 3:11)

This is what “Moody” the famous evangelist has said: “If only a sinner sits by himself in a quiet place thinking about his eternity (the destiny of his life after death) for just five minutes he would have been saved not only from his sins but from hell as well”.

Dear reader… you’re may be searching and looking for your unknown future and destiny, or you may find yourself living in darkness hearing inside you fearful voices from the unknown when Satan whispers to your ears “It’s a dead end…dead end you’re not successful but unlucky and without hope”. You might also hear a thought from your inside that tells you that God has created you to affliction and misery and so as was your past and your present a series of continuous oppressions and tribulations also will be the destiny of your future.

But the Scriptures says: “The reason the Son of God (Jesus Christ) appeared was to destroy the devil’s work” (1John 3:8) and that literally means that the Lord Jesus came specifically to destroy all the devil’s work that hurts your life. He came to change the dark, pessimistic picture that you have pictured in your mind regarding your future and your destiny.

That’s what the Lord is telling you:

And now .. What does the Bible say?

The Holy Bible says: “The present heavens and earth are reserved for fire, being kept for the day of judgment and destruction of ungodly men … He is patient with you, not wanting anyone to perish, but everyone to come to repentance” (2Peter 3:7-10)

Life is obviously full of troubles, oppressions and disasters, facts of life but listen to what Jesus also has said: “I have come that they may have life, and have it to the full” (John 10:10) Which means that Jesus came to change your future and obviously this is also a fact.

Although life in itself is full of troubles and disasters, Jesus came to be the way to the life for all believers and to enlighten the life of the person who comes to him.

And we are going to help you start the way to an awesome and blessed future and destiny through that tract.

The Truth of Death

Death is also a true fact. The death’s hand is stretched out to reach the creation without mercy, and we are going to die one day like the others who died previously before us. The day will come when we’re going to meet the Lord of the Throne, the just judge, to hear the voice of eternity saying: “Give account of your steward-ship, what did you do and how did you live your life on earth”.

The Lord Jesus Christ loves you, he came born of the virgin Mary, a virgin birth, not of the will of the flesh and he lived on our land without sin or deceit. He was full of compassion for all the needy, he heeled the sick, gave sight to the blind raised the dead and gave them life, he caused the lame to walk and the deaf to hear that’s how he changed the future of many people by enlightening their future and even now is still changing and enlightening lives of million of people.

In the book of Mark, chapter 5 we read a story about a woman who had been subject to bleeding for 12 years. She had spent all that she had on doctors, she became weary, grew worse and was full of fear thoughts inside her that kept on telling her “your future will be same like your past and your present”.

But Jesus came, and she heard about him so she ran towards him and thought: “If I just touch his clothes I will be healed and there was the surprise”!

Jesus turned around and asked “who touched me…because power had gone out from him”. That’s right a power, a spiritual power had gone out of the Lord Jesus Christ to heal the woman at once. The woman’s faith has healed her, changed the dark image of her future and restored her health. She went back to her husband and children rejoicing and praising.

That’s right Jesus could change your future to a glorified life as he could provide for all your needs. Million of people in the world have experienced a change in their life exactly like that woman, you might have met one of them sometime throughout your life or may be one of them is living close to you, in your household or your work. You might also ask yourself amazed how did that fellow changed at once so radically? You might have heard him once telling you “Jesus has changed me or saved me or gave me a new birth”.

Yes indeed Jesus is still setting people free, this is the plain truth that you ought to understand, comprehend and search for, only because it’s the authentic secret to change your future to the best so as to guarantee the eternity (life after death).

But what’s after death?

Satan could proclaim to you how God is unjust as he created you to misery and affliction only to deliver you at last to hell and to the fire that he did set it up for you. We all know that death won’t have mercy to spare anybody, child or elder, man or woman, adult or youngster, rich or poor, educated or ignorant.

The Holy Scriptures proclaims that Adam lived 930 years but afterwards it says and then he died. Methuselah lived 969 years although he lived long life but he also ended up by dying.

Death is a dreadful word, and separation is also unbearable but only the Holy Scriptures has described the after death, it has described your eternal destiny (that has no end) by saying: “And as it is appointed unto men once to die, but after this the judgment” (Hebrews 9:27)

Indeed the everlasting torture is not only for a second but it’s actually for every second for ever from which arises smoke of the wicked being tortured for ever and ever.

My Dearest… If this is the destiny of the wicked, we thank the Lord Jesus Christ the meek lamb of God who is also called the Scapegoat who came to die instead of us, to bear our punishment and to give us an open ticket to enter the heavenly glory instead of the fire of hell.

If the bible is telling you that there is punishment, judgment and hell after death for the wicked, it also tells you that Jesus came to take your place and set you free to the glory.

Don’t believe now Satan, only believe the words of God who said: “I have come that they may have life and have it to the full” (John 10:10).God is worthy, believe me my dearest, the Lord Jesus is worthy that we forget for him all the matters of the world and all what takes our attention down here on earth and to cling tightly unto him. Jesus is worthy to be loved from all our heart, worthy to reign over every corner of our life.

And because God is fully and absolutely just, you need somebody to pay the price of your iniquities (to sponsor you) and only Jesus did that by his death on the cross.

And now the matter is extremely easy

Just do your part … nothing could be accomplished unless you start the first step. You have to start by a wholeheartedly decision to believe that Jesus died and rose from the dead in the third day as it is written in the scriptures. And that He is the living Christ who did bear your iniquities, your diseases and curses on the cross as an offering sacrifice instead of you, and he rose to give you a victorious life.